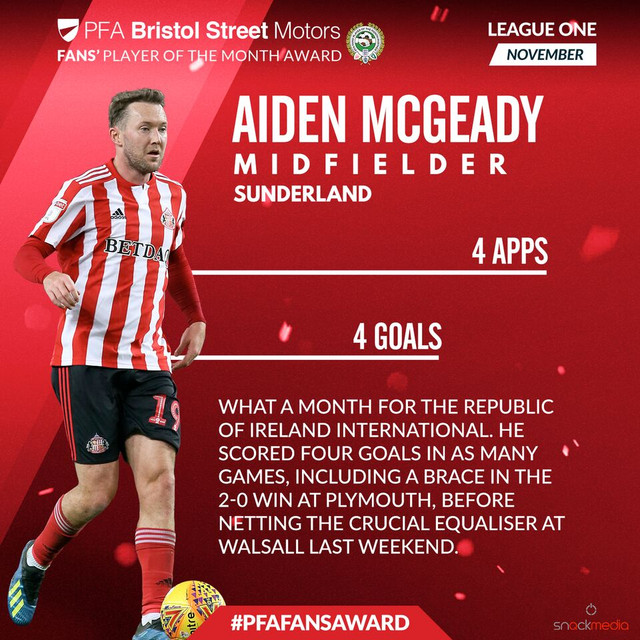 Today the Irishman has made the headlines for a couple of reasons, both exceptionally positive in my eyes. He is nominated for the PFA League One Player of the Month award (vote above!), and his grilling of Chris Coleman will be available for the country to enjoy in next week's Netflix documentary 'Sunderland Till I Die'.

Throughout his career for the former Celtic winger has had the same reputation linger over him; full of talent but a liability when it comes to motive and teamwork. Maybe we're benefiting from his now more experienced head, but reflecting on his Sunderland career so far I think he's shook off that reputation.

Last season, as Sunderland tumbled into League One, McGeady was one of the few dim (very dim) lights amongst the collective darkness which engulfed the club. Now that the settled dust is moved to one side, it's clear that Sunderland was mismanaged to relegation with a group of players that had enough about them to at least avoid it.

We all know how disasterous Simon Grayon's short stint as manager was, but despite talking a good talk Chris Coleman proved no better. In the documentary, McGeady gave a frank interview firing several shots at Coleman's tactics and player management.

"t's just kind of an acceptance of, 'That's OK'. You come into training a couple of days later and everyone is laughing and joking and we've just been beaten 3-0 at home."

Under Coleman's tactics, McGeady said we had "no chance of winning a game", and said that the Welshman mismanaged the Lewis Grabban situation.

This season started fairly slowly for McGeady due to injury, but has now proven himself an essential part of our promotion charge. I expected him to want out in the summer, to be honest, and when he didn't leave I wasn't convinced he'd apply himself enough to make an impact. Thankfully, I was totally wrong.

Not only has McGeady embraced League One football, you can see on the pitch he is loving life as Sunderland's main creative outlet. Whether he's directly involved in a goal or not, he tends to be one of the first to celebrate a Sunderland goal. His work ethic has improved a lot, tracking back as required.

In today's football the norm would have been for McGeady, who has earned a few quid in his career, to turn his back on Sunderland to earn a cut of a transfer fee and maybe even a little wage bump. So it's refreshing to see a player buck that trend, knuckle down and buy into Jack Ross' vision along with the rest of the dressing room.