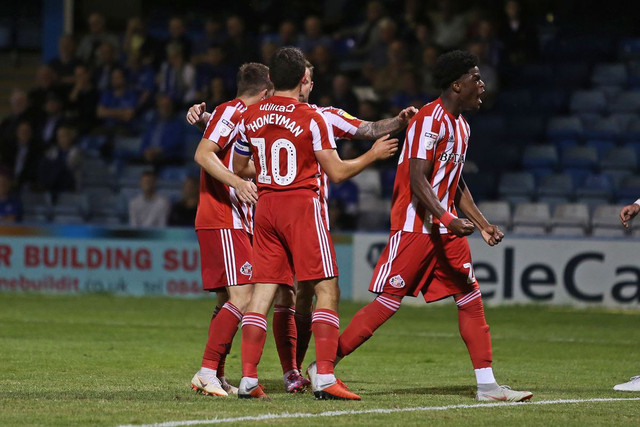 He knows his job is made more difficult due to teams changing things up when they visit the Stadium of Light, but Sunderland’s recent poor form has been his biggest headache, although it is one he’s only had to endure recently rather than for decades like the rest of us.

“It’s hard to predict the league at this stage in the season because, as has been the case with us too, there’s quite a lot of variation in terms of personnel in games because of the schedule and demands of games,”

“But as well, concern over familiarity means they change the way they play as well, and Gillingham have done that in the last few games.”

“So, it’s not always easy to predict what you will face in terms of line-ups, but we do know that each and every team still has a lot to play for and this will another challenging game for us.

"In the last couple of weeks, I have been really frustrated because we haven't been playing well and that, believe it or not, worried me more.

"In that period when we weren't playing well, I was more uptight because I was searching for answers as to how do we do this better, and how do we create more, because we weren't creating an awful lot.

"But in the last two games we have created much more and looked much more fluent in the final third.

"If we can keep on doing that, I believe we will win games.”

Gills boss Lovell is desperate for his side to carry on their winning ways following a home victory against Scunthorpe on Saturday. His Gills side have struggled for consistency and he wants to see his side play well tonight. As seems to be the script for every opposition manager, he spoke a bit about the money Jack Ross has at his disposal, and the size of the stadium and fan base, nothing new there. He hopes the confidence gained from the Scunthorpe win will prove invaluable as his side could well be involved in a relegation run in.

“There will be a buzz around the place. We’re really looking forward to Sunderland which will be a different mental approach now we’ve got this behind us.

“We go there in a different frame of mind and it’s important that we push on. We want to get to 50 points as quickly as possible and if we battle like that then we soon will.

“It’s very close and it is going to be a tight end to the season, but we’ve done it before and we’ll do it again.”

"Sunderland have got a great bunch of players but it will be about the application and work rate that we put in.

“We are going to a big stadium with big support but that shouldn't faze us because we have gone to Portsmouth and beaten them. We will look forward to it."

Gillingham arrive as a team full of big, burly blokes and a sprinkling of pace I their wingers. This is a team which looks made to sit back, hold strong and strike on the counter and that’s just what they’ve done.

No one can argue that the Gills aren’t playing to their strengths, even the goalkeeper is 6’9! This tactical approach has proved fruitful at times, especially against teams who like to keep the ball on the floor and play, something which Sunderland are supposed to do. If the Gills midfield is allowed to knock balls over the top of our back four to turn our centre backs it could be a very long evening. It’s vital that we have some vision and movement in our midfield to counter act this as teams who have the luxury of time and space to play tend to do well, just as Accrington proved on Friday.

When Dunne and Baldwin are called into chasing attackers facing their own goal everyone can tell that we’re in trouble. I actually think that the whole team sitting tighter and deeper has a huge impact on our ability to play. What’s the point in having a wonderful passer of the ball in Grant Leadbitter if he dare not leave the space in front of the back four because of the pressure we were under defensively. George Honeyman is reduced to being a terrier, running around the middle of the park chasing endless long balls. Which leaves poor Will Grigg who arrived for a significant amount of moolah and to much fanfare stood chasing shadows up front alone (Wyke was so poor last weekend Grigg appeared at times as a solitary figure). His movement is great but if the next attacking player to help him out is as close as the centre circle then it doesn’t take a genius to work out why attacks fizzle out if he’s not banging the goals in first time. Lewis Morgan should probably get a chance as well, he looks a real player when he’s been on, able to take his man on but always playing with his head up and looking to get his team mates involved.

So Sunderland need balance. A slight change in personal or the way certain individuals play. Reading over the points I’ve made above reads like a list of faults. A list of faults which are causing Sunderland to not function as a sum of the main parts. With a little more fluidity I do believe the lads could start from where they left off on Friday. Quick passing in the middle, be a little more direct as we approach the opposition box and look to fashion a chance for that man Grigg.

I genuinely believe that the way we played in the second half against Accrington may prove to be a timely reminder about how good we can be. Serve to show the players what we’ve been missing recently. Start from there and improve and we can only be looking at another high scoring affair, hopefully in Sunderland’s favour. 2-0 Sunderland.