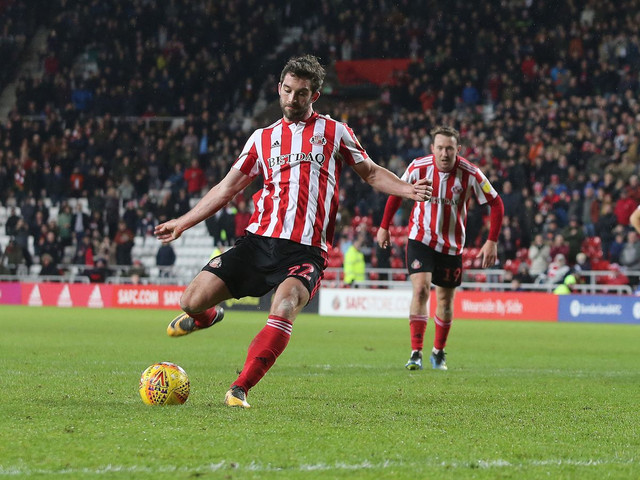 Sunderland started brightly, pressing Gillingham pretty much back to their own 18 yard line. In the 6th minute a corner from Leadbitter, not dealt with by the Gillingnham defence, was eventually turned in at the back post by an onrushing Lee Cattermole to score what has been quoted as “his first league goal at the Stadium of Light”. However, just 1 minute later Gillingham's Tom Eaves, who was a reported January target, pull the Gills level after Sunderland failed to clear to the ball. The defence were busy staring at the linesman for a flag as the striker rounded a helpless McLaughlin to level things up.

Sunderland again went on the offensive and once again a Leadbitter corner was not dealt with, allowing Flanagan to head home. This then lead to a quiet spell where Maguire went off injured as he pulled up after making a tackle. Gooch replaced the King and Sunderland seemed to be in control of the game.

Gillinghams pacey counter attacks were causing problems at the back but Sunderland appeared to be fairing well against them. Then, in the 40th minute, Sunderland once again failed to clear the ball and allowed Hanlan to score a tap in. Towards the end of the half, McGeady's free kick hit of the wall and into the keepers waiting hands to bring an end to the first half.

This time Gillingham came out of the blocks quickly causing Sunderland to sit deep. This muted Gillingham's attacks which seemed to rely on speed to get in behind, and Sunderland slowly took control of the game. Penalty appeals were waved away by the referee, one of which after Grigg almost had his shirt ripped off of him.

In the 59th minute some neat football allowed O’Nien to power his way into the box before being brought down by a defender leaving the referee, this time, no option but to award a penalty. Grigg neatly tucked away for his first of, hopefully,many goals for Sunderland. From their it seemed a matter of time before Sunderland struck a 4th but the nervy crowd were begging for it to come sooner rather than later after some questionable defending from Dunne and Flannagan.

In the 77th minute some neat footwork from O’Nien earned Sunderland another Penalty after being brought down by a poor tackle by the Gills defender. This time McGeady stepped up and calmly slotted it home beyond the despairing goalkeeper. Sunderland saw out the game with little to no trouble after that and seemed to be, dare I say it, comfortable winners at the final whistle.

A game that was made a whole lot harder by some dodgy defending, but it never looked like Sunderland were going to lose. Our midfield was a lot more balanced with Cattermole in there which freed up Honeyman to do a bit more attacking. Sunderland played some good football and, on the balance of play, probably could’ve had about 2 or 3 more goals on the night if the final ball had been better.

A pacey team who seemed to thrive on counter attacking with Tom Eaves at the head of it. It’s clear he has a talent and I am in no doubt he will leave in the summer because his movement, power and presence which caused Sunderland problems for most of the game.

Needs to move the ball quicker but did what he had to do well. Was let down by the defence twice.

Looks promising going forward but needs to improve on his decision making. Tried to bring a high ball down running towards his own goal with a defender on his back…just get rid of it and reset.

Scored a goal and looked the more assured of the 2 centre backs, but still a bag of nerves at times when defending.

Feel like there is a lot to come from this lad but needs to start dominating his duels. So many headers just seem to go nowhere. Looked the nervier of the two.

Doesn’t look all that confident defending but does it well and always a threat going forward. Hard to judge if he would benefit from being higher up the field. Seems to like attacking from deep. Think he’d make an excellent wing back instead of a full back.

I’m going to be honest. This guy frustrates the life out of me. Clearly has a talent and flair. Will he do 5 step overs and Cruyff turn before putting the ball into the box? He had so many opportunities to play the early ball but had to take someone on fir...so frustrating. He had a good game but it could’ve been a lot better.

Has fantastic feet and links the play up well. Gave the ball a few times but works his socks off from minute one. Needs to work on his final ball and shooting and he could easily become a cracking player.

Ticked over nicely for 80 minutes or so. Good deliveries, cool head in possession and makes a huge impact without really getting noticed. Unlucky not to score from a good save.

A Lee Cattermole in this form is unplayable at times. Breaks up play, starts attacks, recycles the ball and can score goals now. A stand out performance allowed Leadbitter and Honeyman to go forward and cause problems.

After the King was wounded in battle, Gooch came on and faired okay I guess. Another one who seems to be so close to becoming a better player but gets let down by his final ball. I’m sure it will come with time.

Did fantastic on his own and I need to make an apology. He isn’t just a goal scorer, the lad can play. His pace and footwork became vital in putting Gillingham under pressure and forcing them deep into their own half.

McGeouch and Power came on but the game was dead by this point, just fresh legs.

MOTM: Cattermole or Grigg both did their jobs brilliantly hard to separate.