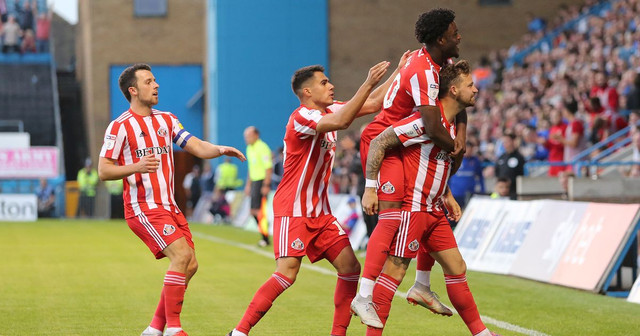 That was my main thought following Friday’s spirited fightback against a team that were so out of form they hadn’t scored a league goal this year. Let that sink in for a second, Accrington Stanley hadn’t scored this year and managed to get two against us. But this is a type of disappointment we should all at least try to enjoy.

Last year it was the desperate scramble to try and save our sorry season in the Championship, this time we’re competing at the top of the table for automatic promotion. Our fortunes could not be any different and we probably have Jack Ross to thank for a lot of this brief success.

But enough with my personal feelings following that Friday night tragedy. We can’t be stuck in the past and we must look forward. Forward towards Gillingham who arrive with a few relegation fears in the back of fans and players minds alike. Of course having some trouble with form is no indication of how a game against Sunderland will go, Accrington doubled their 2019 goal tally at the Stadium of Light remember. Can the lads finally return to winning ways (and scoring more than one goal) under the Tuesday night lights?

First we have to sadly return to the events which transpired on Friday. Accrington arrived with little hope and little form, not registering a win since mid-December last year. So Sunderland, being the tremendous hosts that we are, decided to play worse than we did against Oxford. Not to take anything away from Accrington, whose tactical approach was lethal to the haphazard defending on display by Dunne and Baldwin. Sunderland just don’t seem to get going at the moment.

I spoke last week of moving the ball for little reason and with no intent and it was on display again. Dunne looked like he had just learned to walk never mind run as he seemed to be stumbling around in front of McLaughlin every time the ball was within a 2 metre distance to him. Jack Baldwin thinks it’s acceptable to practice MMA skills in a six yard box so we’ll just leave the penalty he gave away at that. Our players have a remarkable habit of making rash challenges when the opposition is posing no direct threat. What’s wrong with forcing a player out? Or just let him take the ball towards the corner, why do we have to scythe players down if it looks like they might get passed us? I do wonder if Accrington player Smyth would have had the quality or time to get a decent shot away under pressure from Jack Baldwin from what would have been a very tight angle on the right of goal.

The shambles changed with the introduction of the King. Suddenly our midfield wasn’t on the back foot, our defenders weren’t getting turned and Will Grigg didn’t look like he was playing on his own. Given license to roam behind Grigg or to drop deep, Maguire dictated play with a classy flamboyance which has been absent from Sunderland’s play since our early season success has faded. The Scot picked the ball up in dangerous areas and played with his head up, picking out players making runs, switching play and generally driving up the intensity and quality of our performance. It could have been so much worse if The King hadn’t came on and produced the type of swashbuckling performance that we know could and should be his signature.

Gillingham fans on the other hand have far more reason to be grumbling than us. Mixed results which has seen the odd win and draw thrown in with a few humbling losses to the likes of Doncaster and Barnsley see them 3 points clear of the relegation zone. But with six teams all a win away from potentially toppling Gillingham further down the pile, this will be no time for Steve Lovell and his men to rest on their laurels. This should prove more than enough motivation for Gillingham to come with the intention of sealing 3 points, just as Accrington nearly managed 3 days ago. The worrying thing for the Gills will be the dry spell star striker Tom Eaves currently finds himself in. The big target man hasn’t managed a goal since he converted a penalty at Coventry at the start of February and managed save his side a point in the 91st minute.

Whatever happens, Sunderland need to be a lot better than they have been in recent memory if they want to get some all-important momentum going for the promotion run in. It could start tonight, but more than anything, Sunderland just need to be a little more daring. A team of good players under a good manager, what could go wrong? (DRAW!!!)