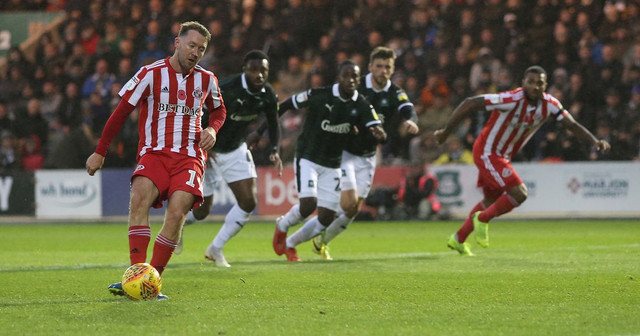 From the disappointment of helping Accrington Stanley get their 2019 up and running in League 1 with a draw a few weeks ago, to the excitement and expectation of facing down an in-form Plymouth side.

Plymouth make the mammoth journey from the south coast all the way to the north east on a sunny Saturday. Sunderland will be hoping to do the double by winning here at the Stadium of Light following a 0-2 win down on their patch back in early November. Aiden McGeady was the man to score the goals that day, beating a few men around the edge of the box before curling one past the keeper. His second was a penalty that Luke O’Nien won… sounds familiar doesn’t it? Can the men in red and white repeat something similar to seal the three points today? We’ll soon find out.

Sunderland return to the Stadium of Light after a resounding 0-2 win over Bristol Rovers last weekend. Following a dip in form and some obvious promotion anxiety and general grumbling voiced by some fans, all will be relieved that Sunderland are back to consistent winning ways. Against Bristol last weekend the improvement in a number of areas for Jack Ross’s side was clear for all to see.

Firstly Jimmy Dunne and Tom Flanagan seem to be forming a solid partnership in the middle. Jack Baldwin will be desperate to get his place back, but following a long season where he has played as many minutes as any other defender in the team, he has begun to look Jaded and erratic which has justified Ross’s decision to leave him out recently. Reece James and O’Nien continue to be two of the most consistent fullbacks in the League, providing a steady defence in front of the number 1 man in-between the sticks, Jon McLaughlin.

A solid midfield of Cattermole and Leadbitter boasts more class and experience than pretty much any other team in League 1 can call upon. Honeyman provides the legs to complete this midfield, while again we have even more footballing pedigree to call upon out wide in Aiden McGeady who is now into double figures for the season. Will Grigg’s record (and his song) precedes his in this league, all opposition defences will be well aware what he’s capable of.

It reads a little like a who’s who of Sunderland but going back over that little list of which personnel I believe to be the spine of this side, while allowing Jack Ross room to tinker, it is obvious why Sunderland are coming good. The experience, quality and personality of all those players could arguably rival any other in the league if you put them head to head with a player from another team.

Following some upheaval and panic in January following Josh Maja’s exit to some mediocre French side, I believe the team is beginning to settle and the players are showing a greater understanding of each other. When the defensive system wasn’t working due to the arrival of Dunne and the attacking system was working more rusty spoon than gilt edged sword due to a lack of an in form goal scorer, opposition sides rightly exploited that frailty in Sunderland. But now Jack Ross has had long enough to work with this side and the hard work he puts in on the training ground is again beginning to bear fruit.

Sunderland were deserved winners against Bristol Rovers last time out. Weathering an initial storm before controlling the game and taking their chances clinically (apart from Wyke at the end) Sunderland had too much quality for Rovers. McGeady seems to be finding more space and looks to be really enjoying himself, Will Grigg provides impressive link up play to go with his poaching instincts and Leadbitter and Cattermole are dominating the middle of the park.

Lewis Morgan must be pushing for a start, watching him beat the Bristol right back whenever he chose was a joy to watch and he really did supply Wyke with three opportunities on a plate. I wouldn’t have been the only fan who was maybe wishing that Will Grigg had stayed on the pitch. It’s giving the impression that Ross is close to knowing what his best team is at the minute and consistency in selection due to a near fully fit squad is only going to build on the improvements they’ve made since January. Basically Sunderland just need to build on this momentum and could potentially be red hot for the rest of the season.

Today’s visitors Plymouth are in a similar purple patch in the form book as well. After a first half of the season which gave the impression that the wheels had well and truly came off at Argyle as they propped up the table from rock bottom, to mid table mediocrity after winning 6 of their last 9 games in the league. Derek Adams has been the gaffer since 2015 and will be looking to build on this good form to secure as high as finish as possible to ensure a good starting point for next year.

Some are speaking about Plymouth potentially squeezing into the promotion places, but I’m a realist and I highly doubt that anyone above them would capitulate to that extent. They did smash Rochdale to pieces last time out, winning in emphatic fashion by scoring 5 and conceding 1. Top scorer and supposed former Sunderland target Freddie Ladapo bagged a double in that game but also picked up a thigh strain which could keep him out of action this afternoon. They’ve still only lost the once in 2019 though so should provide some formidable opposition to Sunderland.

Part two in a sec!