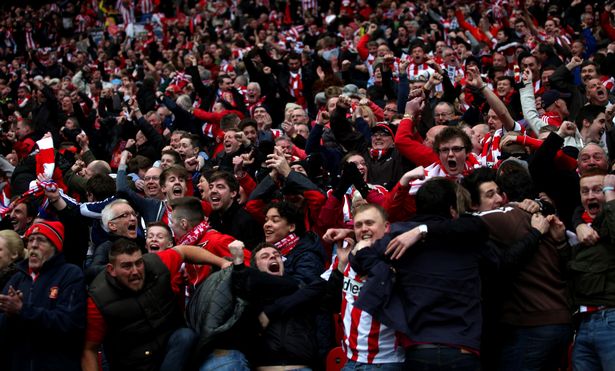 That had me thinking, so I decided to reach out and see what got these fans interested in Sunderland A.F.C. I initially thought it may have been hype from the Netflix Series “Sunderland till I Die”, I was wrong. My messages looking for Sunderland fans travelled around the world to North America, back to Sunderland, and all the way to China. I wanted to know what Sunderland means to them and how they became Sunderland fans. So, I’ve decided to put out a series of interviews.

One of the first people to respond to my message was Matt. He lives in New Mexico, USA and I thought I’d ask the obvious question first.

How did you start supporting Sunderland?

Matt’s story goes all the way back to 2006 when Roy Keane was appointed as manager of Sunderland. Matt told me

“Growing up Roy Keane was my favourite player, when Keane had been appointed manager of Sunderland AFC this is where it began for me.”

Matt went on to tell me that since then he has “Been hooked ever since and I have fell in love with the club”.

Unfortunately, Matt has never been able to make it to the stadium of Light yet but certainly aims to make the trip “one glorious day it'll happen, and I look forward to it.”

Is there a particular moment that stands out to you?

“The first memory that always comes to mind is Defoe's Volley vs Newcastle. It’s Tattooed on my brain. Just one of those moments you can revisit in your head nearly frame by frame.”

While that was his favourite moment, he told that he has “Great personal memories of SAFC, especially during the Keane era.”

What are your thoughts on this season and the new ownership?

“It has been nothing short of spectacular for me. I know it’s on the back of consecutive relegations, but I have enjoyed every second. Stewart Donald, Methven, Ross, the players, the fans, etc have all played their part in breathing life back into the club”

“I have been able to catch every game and it’s been nice to see the passion and excitement back. Sunderland AFC are where they are for a reason, but the challenge was embraced from ownership to the supporters”

Matt came across from minute one as someone who’s heart bleeds red and white and I loved hearing his story. My final question to him was a simple one.

In a sentence, what does Sunderland A.F.C mean to you?

“I love Sunderland because it’s a club drenched in history, and a mentality that embraces the fact if you work hard and fight for the badge on the shirt your efforts will be celebrated, to me it’s a club like no other.”

I don’t think I could’ve answered it any better.

I hope that one day Matt gets to make that trip to the Stadium of Light, but he is certainly more than a fan. He’s a full blooded Mackem and all I can say to him is keep the red flag flying high.