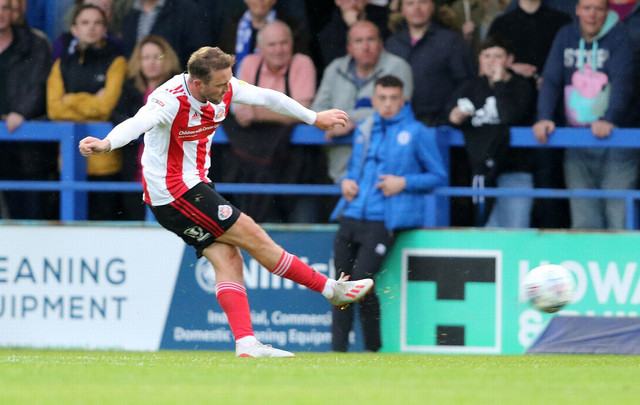 Particularly towards the end of both periods, the Lads looked leggy and in danger of conceding. But, three points it is, and wouldn't we take that every week in our quest for promotion? Like when you buy one of those scratchcards and you carefully remove each individual segment, we have barely scratched the surface of this campaign. Any win is ideal to avoid us having to play catch up.

Looking at the ratings, it's not quite as positive as post-Pompey match, which correlates well with my opening paragraph. Four players did not achieve the average rating of 6, indicative of how much work we made of things. In fairness to Rochdale, they had a solid game plan and made things difficult for us. That is true for most teams we play, but the Dale approached it a little differently. Instead of kicking as many Sunderland players as possible, they aimed to frustrate us out-of-possession and exploit our weak left hand side of defence. Their incredibly young full back, Luke Matheson (just 16!) had a tremendous game, marking Aiden McGeady.

Thankfully, that bit of quality shone. Our opener, finished in typically emphatic fashion by McGeady, was a sublime move before the goalscorer turned supplier for Charlie Wyke. The second goal was a much more 'League One' scruffy goal. It was probably the only two times McGeady found himself in a lot of space, and he made both occasions count.

Incredibly, and for the first time since we released this feature a couple of seasons ago - we have a 3-way tie for man of the match. House rules apply, and therefore I have the nod to the player I think most deserved the accolade. Below you'll find the Lads in order of their rating, and a couple of comments kindly left. You can see the full list here, by clicking on 'Submit ratings'.

Fancy a crack at Sunderland blogging? Now the new season is underway, we're looking for a couple of new writers to join us, click here to drop us an email.

12th (and last): Lynden Gooch - 5
Wouldn't miss him if he was sold! - From the outside looking in
The only player in football who can find a dead end when there isnt one to find, WOEFUL - Agent Ashleys Bank Account+

10L Conor McLaughlin - 5.6
Out of position, soon out of the first eleven! - From the outside looking in
Not a left back. A bit unfair to judge him until he plays in his natural position. - GordonB

9th: Chris Maguire - 5.9
I just wish we could guarantee the flair he can bring. A little off the pace tonight but still an exciting player. - Ann
Nothing spectacular today - Briggsy

8th: Will Grigg - 6.1
Wigan may consider taking him back? Have we asked them Mr Ross? - Douglas
Better but still not convinced - coachees

4th: Aiden McGeady - 7
Has the ability to win games on a regular basis, another good goal tonight. - Kenny R
Maybe not his most consistent performance but still a joy to watch. Always dangerous. - Ann

=1st: Jordan Willis - 7.2
Good combo with Ozzie (Ozturk) - coachees
Grew into the game, won every duel on the air, could be our find of the season. - Kenny R

=1st: Jon McLaughlin - 7.2
Second half performance was outstanding, was the diffbetween one point and three. - Kenny R
Best keeper outside prem. Give him what he wants and sign him up long term - GordonB

=1st (and Man of the Match): Charlie Wyke - 7.2
Commanding. Good effort and good quality. If he continues like this I'll be eating my words from last season. Keep it up big man. - GordonB
The big man did well and won his fair share in the air. In the right place for the goal. - Robin Ramsey