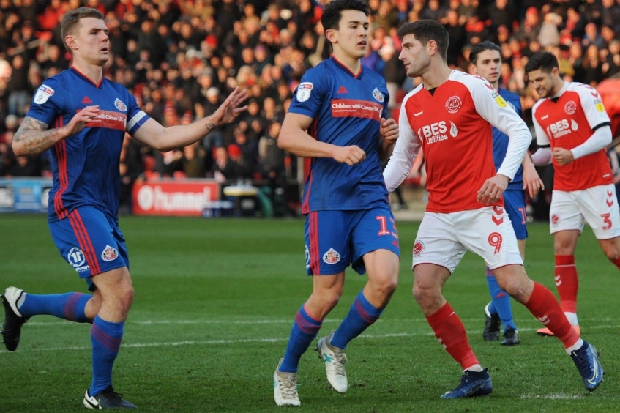 The performances are interesting because the consensus is that they go together as a pair, highlighting that perhaps there is room for optimism amongst the gloom. In fact, they were very different, and we get a good feel for the reviewing the player ratings and comments our readers left.

You may think such ratings don't represent a balanced view, such is the nature of human emotion shortly after a good or bad result. However I'd argue it gives a good indication, if nothing else, about what went right and wrong on the day, because trends are very clear and easy to add weight behind.

Overall there was a significant drop in performance between the Doncaster victory and Fleetwood draw, the team as a whole averaged a rating of 6.9 against Doncaster, but just 6.0 (bang average) against Fleetwood. In fact, every player bar the goal keeper dropped in performance. Jon McLaughlin rose from a 6.3 to a 6.5. Here are a couple of comments left about the number one;

The biggest dropper was Lynden Gooch, who dropped nearly two full points, yet was still, in fairness, above the average rating for the team (6.3). We took a couple of comments from 'Captain Spalding' who kindly contributed to both matches, which I think are very fair evaluations of Gooch's input in both games;

The standout player. Parky is probably right to say that Goochy 'sets the tone'. Great goal, too.

Full tribute of good intentions and high on workrate. Some things didn't come off.

Drilling down to units, it's interesting to note that Sunderland's midfield duo came closest to maintaining the level of performance between the games. George Dobson and Max Power averaged 6.55 against Doncaster, before dropping to 6.25 against Fleetwood. Neither seems to convince everyone, with a mixture of comments left across both games;

I'm never sure about Power - he worked hard and kept the game moving, but at times his choice of pass is poor - Sir Bob

Huffed and puffed, weak as p**s in the tackle - Agent Ashleys Bank Account

Tidy player with energy. Needs to be kept in the team as will only get better with games. - Hammond

The story is different in defence and attack where significant performance drops are indicated by the ratings. All but one of the back five (excluding McLaughlin) dropped at least a full mark between the two games, and Alim Ozturk - the only defender not to do so - still dropped from the lowest score of the whole team from the Doncaster game (6.3). Then unit was rated an average of 5.88, lower than any other unit on the pitch, with Joel Lynch propping up the ratings on a disappointing 5.3. Comments described the 32 year old Welshman as "erratic" and that he "lacks pace".

We saw the biggest drop in performance in attack. The same trio averaged 7.5 against Doncaster (Gooch man of the match with 8.2, Chris Maguire with 7.3 and Charlie Wyke on 6.8), but tumbled to 6.1 on New Years' Day. All three players dropped around a full mark, with Gooch (mentioned early) dropping 2. This isn't surprising; since we couldn't score from open play. It is, unfortunately, further evidence to support the theory we do not have enough quality where it matters to win enough football matches.

Despite dropping to sub-average, Wyke received almost exclusively sympathetic comments, that are perhaps synonymous with Sunderland’s scoring woes. Here is a selection from both games;

Such a shame he can't score as his commitment and work rate were superb today. I do wonder what he has done to referees in the past because he rarely gets a free kick yet is often penalised for very little. In particular benefitted from the 2nd half tactic of playing long balls into space he could attack rather than straight at him. - Sir Bob

Ran his socks off. Should of scored but missed good chance. - Paul Hetton

Unlucky not to score, for me isn’t the answer - Anonymous

One thing I think is very positive to highlight from both games, which I think is supported by the feedback left in our player ratings feature, is that work rate and general balls has improved dramatically over the last two games. Phil Parkinson had, for too long, presided over toothless showings from a Sunderland side intent on rolling over, but we have seen a lot more fight in the Lads recently. That is absolutely something to feel optimism about.

However, our first team is weak, and our squad as a whole is even weaker. We need significant improvement in January, which feels unlikely. So whilst we can bask in some optimism for the first time in months, perhaps it is still not going to be enough.