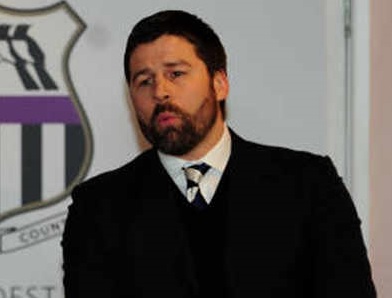 I get it. He leaves Scunthorpe in one of their worst positions for over a decade and his arrival probably means there is no sale on the horizon. Compound that with the unrelated news of them  up the road preparing to be funded, albeit morally dubiously, by infinite riches and the likelihood that the 2019/20 season will finish without the Lads achieving promotion - there's not a lot of postive news floating around the club.

Perhaps I am ever the optimist, happy clapper, blah blah, whatever you fancy - but I see this appointment in a slightly different light.

Cast your mind back just a few days ago and Sunderland lacked leadership off the pitch, or at least it felt that way. The club's hierarchy didn't scream organisation after the departures of Charlie Methven and Tony Davison, and Stewart Donald's distant presence as owner in the face of intense scrutiny made it feel - from the outside at least - that Sunderland were struggling for backroom stability.

Donald did not to address this immediately, presumably under the expectation of a sale.

Despite the uncertainty, Phil Parkinson was starting to get things right, though a dreadful March interupted by the global COVID-19 crisis means Sunderland look set to spend at least another season in League One.

The arrival of Rodwell tells us, I think, that the club is not going to be sold soon, and perhaps is an indication that whatever deal was in the advanced stages is now either postponed or dead in the water. Assuming that to be true, Donald's move to appoint an experienced CEO is a positive one.

"Experienced you say? Bah, the man has failed with League Two clubs. He's not fit to be at this club. You enabler of mediocrity you."

Okay, nobody has said that to me in so many words, but it's a fairly popular sentiment which I think doesn't tell the full story.

Rodwell does leave Scunthorpe in it's worse position for some time. 20th in League Two isn't something you'd want plastered on your CV. Scunthorpe fans don't have many good things to say about him either.

He joined the Irons in 2015 with a mission to achieve promotion back to the Championship, from which the Lincolnshire side was relegated in 2011. He nearly achieved that target, finishing 3rd, just four points from automatic promotion before defeat in the playoff semi-finals in his first full season. They would fall to the same playoff fate in the 2017/18 campaign before an unprecedented drop into the bottom half of League Two.

The summer of 2018 saw upheaval at the club, after little investment the season before, Rodwell oversaw a bit of a selling spree with key players Duane Holmes, Murray Wallace and Hakeeb Adelakun all leaving the club for Championship sides. Scunthorpe raked in around £7 million, little of which was reinvested in the squad. It seemed owner Peter Swann had given up on the club's strive for Championship football, much like he had given up on a desire for a new stadium.

And here comes my point - blindly assigning blame on Rodwell for Scunthorpe's demise comes with little evidence. His impact looked wholly positive, even if reserved, until the plug was pulled on squad investment. His experience as an EFL Director and FA board member feels important and invaluable. He has a history of saying little publically, which probably hasn't helped his reputation; though a bit of quiet and structured leadership sounds like just what we need.

Donald is here to stay, for now at least, and this appointment is a positive step forward. Interesting anecdote that Rodwell was part of the FA board that hired and fired Sam Allardyce.

So one could say he owes us a bit of success, let's hope he delivers it, we absolutely need it!