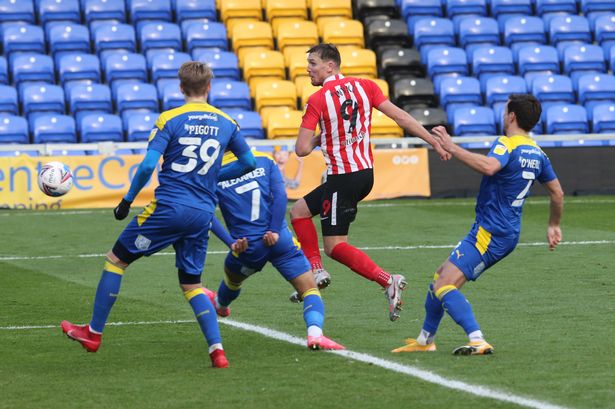 It took only 6 minutes for Charlie Wyke to strike first, then scoring again in the 87th minute before completing an exquisite hat-trick in the 91st minute. Here are this week’s 2 Good and 1 Bad points from the game.

Charlie Wyke seems to have finally found his shooting boots three seasons into his Sunderland career and now is as a good a time as any. Wyke notched his eighth, ninth and tenth league goals of the season, with the second of his goals in this match being a top class finish.

Let’s be honest, Wyke is far from the perfect centre forward but being the only striker at the club to show any signs of life this season it’s easy to see why Lee Johnson has put faith in him since he arrived at the club. It looks like Wyke is starting to get back to the player he was at Bradford.

However, there are misconceptions about the type of player Charlie Wyke is. In the past couple of seasons, he has been utilised as a lone target man or as a battering ram upfront. It’s clear to see that Wyke is more of a poacher and prefers the ball at his feet, which is rather deceiving when you consider his height and physical presence.

He also likes to have a partner up top with him. For quite a while before this game Wyke has been isolated upfront and it has made him look like a poorer player than he is. Although, he must absolutely improve his first touch.

Return of the Willis

This game signalled the return of league action for arguably one of Sunderland’s most important players in Jordan Willis. Even after one game Willis has made a marked impact on the solidarity of the Sunderland defence.

It is no coincidence that Willis' return to the side has resulted in the team keeping a clean sheet; in all competitions this season, Sunderland have kept 7 clean sheets while Willis has been present on the pitch and only 4 without him.

He has built a very good understanding with fellow centre half Bailey Wright over the past year and this was especially evident yesterday. I will not go has far as saying it was Kone and Kaboul level, but this is definitely a strong foundation to build the team on.

Joe Pigott, who is League 1’s third top goalscorer, was pocketed with ease by Willis and Wright. Watching this game, you would not think that Wimbledon’s rangy striker had already scored 10 goals.

Wright has not been as reliable since Willis was injured; having that pace and composure along side him will hopefully end the succession of sloppy goals the Black Cats have conceded in recent times.

Although Sunderland ran out 3-0 winners against The Dons; the score line flatters the Black Cats. They started the game very brightly, creating openings which eventually led to Elliot Embleton producing an excellent throughball to Aiden O’Brien, who the squared to Wyke to score the first goal.

At that point, many fans thought that would signal a very entertaining affair. They could not be more wrong.

The next 80 minutes were an extremely painful viewing. Both teams produced precious little before Wyke scored his second of the game. He was only really allowed this chance due to Wimbledon’s desperation to get back into the game which left them stretched at the back.

Sunderland had the majority of possession for most of the match but failed to capitalise on it. A lot of their play was one paced until the energetic Jack Diamond entered the pitch late into the second half.

The lack of ability to make forward passes just highlights even more the job Lee Johnson has on his hands to strengthen his squad in the next fortnight before the January Window slams shut. The new 4-2-2-2 formation that Johnson introduced last Tuesday has helped to speed up the play but the same problems still lie beneath the surface.

Why not try out quiz of the week looking at the 10 oldest Sunderland players who scored since 2000? Click here to have a crack!