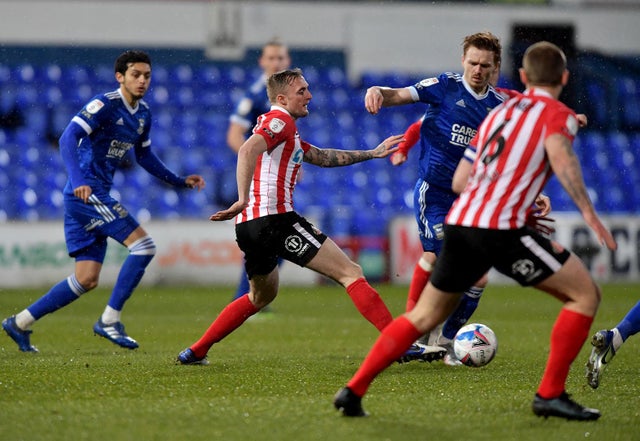 Considering Ipswich have a terrible home record, a manager on the ropes, the game was live on Sky and it was raining; All of the Sunderland(y) variables favoured an Ipswich win, however, in the end it turned out to be a very professional performance from the lads, frustrating yet professional.

Comment of the day: “Pretty quiet night but came up with the goods when asked”

The man with the straightest fringe in Wearside had very little to do at Portman Road last night but made one vital save from an Ipswich breakaway. His distribution is still questionable at times, as well as his confidence in controlling his own box.

COTD: “In the wars but stood tall and brave until forced off”

The phrase, “During the war”, will be stolen from Uncle Albert by Bailey when he talks about this game to his Grandchildren in fifty years’ time. After surviving a horror tackle early on, Bailey ended up leaving the pitch on four wheels after a clash of heads called a halt to a tough day for the Aussie. The time in-between injuries were quiet, tidy and assured.

COTD: “Did okay, nothing more”

A quiet game for Jordan in comparison to his partner in centre back but there are still positive signs of him getting back to full fitness; On occasions he would drive the ball out of defence using his raw power and speed. Solid performance from him tonight.

COTD: “Good work for the goal but not a natural full back”

The general opinion from your comments seems to be that Max isn’t cut out to be a full back and although he wasn’t overly tested defensively last night, there were occasions where his positioning was questionable. Great assist from him for the goal and it shows what a bit of forward thinking and positivity can achieve in any league.

Just the type of game that McFadzean needed after a couple of errors in the previous games. He looked tidy in possession at times but like the rest of the backline, he was afforded the luxury of having very little defensive responsibility throughout the 90 minutes.

COTD: “Grant slows us down but also calms us down”

A great comment leads us in to talking about Grant’s game for us yesterday and it sums up the performance like a perfect bop on the nose. For all of his quality, his ball retention did let him down at times and he can be rightfully accused of slowing the game down far too much when we were desperate to take advantage of Ipswich being down to 10 men.

COTD: “Jury is still out”

A great little flick for O’Brien in the lead up to the goal was about as interesting as Winchester’s performance got yesterday before presumably being taken off at half-time to prevent giving the referee an opportunity to even the playing field after his needless yellow card.

COTD: “Does the basics”

The one thing you can’t fault Scowen for is the effort he puts in over the pitch across 90 minutes but the problem the Sunderland midfield has is that they are far too similar in terms of playing style and ability. I’d love to see Josh take more time with his decision making in the final third as he does have the knack of finding himself in advantageous positions up the field.

When a wayward shot flew 30 yards over the bar after a successful dribble from the ageing wizard, you sort of had that feeling again that McGeady is getting a little frustrated with his lack of end product in recent weeks. It’ll never not be nice to see him cutting inside and taking defenders on whilst trying to make something happen but unfortunately the class he once showed has been missing in the past few games.

Another good night for Aiden O’Brien and he probably should have scored himself but for an opportunity well blocked in the second half. His business in and around Wyke and the edge of the box leaves defenders guessing but I’m sure more game time and experience within the squad will reward that endeavour with more goals in a Sunderland shirt.

COTD: “Well, well, well… I may be coming around to Chaz”

As for more game time and experience leading to more goals in a Sunderland shirt, we come to the main man himself. He got himself on to a great cross from Max Power in the 45th minute and scored a fantastic goal that the Charlie of previous seasons probably wouldn’t have got close to running for, let alone attempting; It just shows how much confidence and belief in your ability can bring to your game as a footballer. Keep going big man!

After coming on for the much-battered Bailey Wright, Dion slotted in well at centre-back and had a good game, enjoying some nice spells in possession without really being asked to do too much defensively. He did have one wayward pass that almost looked as if it might have been on its way to an embarrassing own goal of the season.

Like most supporters, I’d love to see Elliot given the chance of more starting time in the first team. It was a promising showing from him as he outshone a lacklustre midfield with his positivity and drive to move forward.