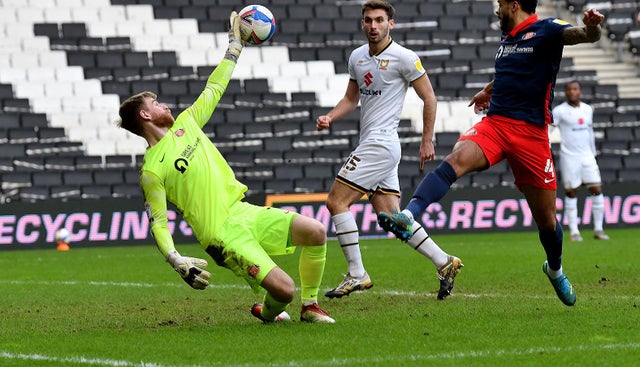 Much like parents watching their children, who can’t act or sing, perform the Christmas Nativity, we all watched the lads yesterday with a wry smile. They tried their best, didn’t they? Bless ‘em.

Comment of the day: “Lee Johnson has a decision to make”

There’s a common saying in football that some saves are purely for the cameras and that could be said the same for Burge’s efforts in clearing the danger for MK Dons first goal yesterday. Burge made an excellent save initially but clawed at the follow up in a style reminiscent to myself when a Spider drops on my head when I’m clearing out the shed. Is it time for Remi Matthews to be given a run in the side?

COTD: “Still way off his best”

Thrown in to the team at the last minute due to an injury to Tom Flanagan, Jordan looked shaky in the opening period as Sunderland struggled to get a foothold on the game. He did grow in to the match eventually as oversaw a mostly comfortable second half for the lads defensively.

For the second time this season Cameron Jerome bullied and harassed the Sunderland defence (until his legs gave out, anyway) and in the early stages Bailey had no answer for his craftiness in front of goal. Possibly still struggling for fitness after being forced off in the match against Ipswich but looked far more comfortable in the second half.

Oh, there definitely isn’t a player that divides opinion in your comments than Max Power at the minute. Is he good, is he bad? Personally, I don’t know why we keep attempting to put square pegs in round holes when it comes to being a football club with the ambition of promotion but I’m hoping Max grows in to the responsibilities of a defensive full back as he gains more experience there. A lovely attempt at a free kick towards the end of the game would have been something had it found the net.

Okay, so it wasn’t the greatest of debuts by Vokins, especially his first half performance but in the second half there was a lot of promise. I’m not a professional footballer but I know how difficult it can be to start a new job, wondering where the kettle is and what not so it’s not overly surprising to see him struggle initially. Jury’s out on this one, let’s give it a few games. Remember Kirchhoff?

It was a heavy pitch yesterday and it showed as Grant seemed to struggle to get around it with any purpose. One of you mentioned the signing of Carl Winchester and his arrival here being an opportunity to rest Leadbitter and hopefully we will see that in the upcoming weeks. Poor set pieces, again.

COTD: “Central midfield, keep him there”

It wasn’t a special performance from O’Nien by any means but he did show a lot of drive and energy, he also proved his ability to be a threat in front of goal; Controlling a mishit shot from McGeady, he trapped the ball and turned a fantastic left footed shot in to the bottom corner. Somewhat fortunate not to be sent off in the second half considering the refereeing display on show.

A frustrating performance yesterday as Lynden found himself in and out of the game on a regular occurrence. When the American did have the ball, he beat his man well but consistently made the wrong decisions in front of goal; He does have the ability to come up with the sublime but could also benefit from using his teammates more in dangerous areas on the pitch.

COTD: “Better than usual (despite that miss)”

Aiden showed what we had been missing from Phil Parkinson’s Sunderland with his creativity yesterday, setting up Charlie Wyke’s opener with a delicious through ball and constantly keeping the MK Dons backline on their toes. There were two misses towards the end of the game that we have to talk about and McGeady will know he should have done better with both.

Linked up well for the opening goal, bringing the ball down well to spread the ball out to McGeady for the assist to Wyke but other than that, I don’t really remember much of his performance yesterday. It’s a role I would prefer to see Chris Maguire playing but I don’t know whether he has fell out of favour with the manager or he’s just given up; There’s also Ross Stewart coming in to the side soon to keep O’Brien on his toes.

COTD: “Keep at it, Charlie”

Another game, another goal and Charlie Wyke seems to be finding himself in the right place at the right time whenever he pulls on a Sunderland shirt recently. However, despite the goal, he did miss an opportunity that he created well for himself that he probably should have scored. Worked hard but struggled to get support from those around him at times.

Jones has looked promising in his two outings so far and he came close to scoring a goal yesterday too. Drove forward with the ball a couple of times and adds much needed mobility to the forward line; He hasn’t played a lot of football in recent months so you can understand the manager taking his introduction slowly but I’d expect him to be consistently in the starting eleven soon.