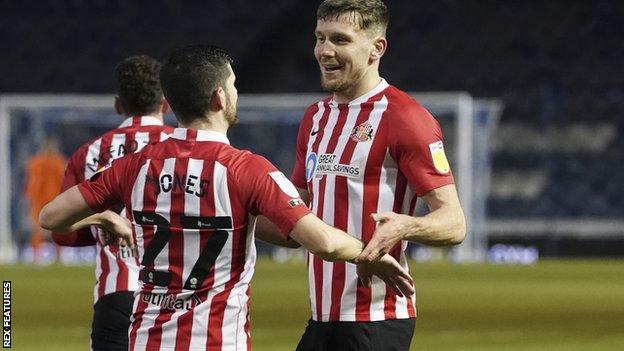 A key component of Lee Johnson’s management career at Sunderland is the ability to get early goals. Most of the teams in League 1 are incredibly one dimensional, especially when they play against the Black Cats.

Under Johnson, the Lads have scored ten goals before the 25th minute in the 19 League games he has been in the hotseat. There was a surreal feeling last night when the Lads took the early advantage; the Pompey players looked shell shocked. It looked too easy.

In the early days of the Johnson era, the Lads used to score early goals but never take advantage of the situation. This ended in frustrating draws and sometimes even defeats like Shrewsbury away.

However, now the Lads go searching for that second goal and can kill games in the early stages of the second half. Other teams are not able to play their silly games by timewasting and winding up the Sunderland players as they must hunt for goals themselves.

Throughout the second half, the Lads completely controlled the game. From the back Sunderland bossed the second period; Portsmouth did not even manage to muster a shot on target.

Pompey’s gameplan was to target Sunderland through longballs and crosses in the box. Dion Sanderson and Luke O’Nien are forming quite a partnership and dealt with everything that came at them.

The physical threat of Ellis Harrison was nullified, and John Marquis was marked out the game. He even resorted to gamesmanship but there was no deceiving the referee tonight who left Marquis red faced when he threw himself to the floor under pressure from Sanderson.

The game could have gone on all night and Pompey still would not have scored. They did not have an answer. At the other end of the pitch, Sunderland attacked with purpose at every opportunity.

The Pompey defence could not live with the threat that the Black Cats posed on the wings. Even the heavily criticised Callum Mcfadzean caused problems going forward.

Sunderland have taken 19 points from a possible 21 in the last seven games, so it seems insane to criticise this team. However, this column is 2 Good and 1 Bad so the one negative takeaway from this game is the midfield.

Although Scowen and Winchester performed to the best of their ability last night, their ability is limited. The best partnership Sunderland can name is Leadbitter and Power, but Power is needed in defence and Leadbitter is nursing a dislocated shoulder. They could play together in the division above.

Both Scowen and Winchester are good at what they do, they are tenacious and win the ball well. However, neither can pass the ball forward or them offer a presence like Leadbitter. They are physically quite lightweight and if the press is beaten the midfield area looks very empty.

Nevertheless, they both played an important part in Sunderland’s first win at Fratton Park since 1997; playing them together will not work every week but we should celebrate their involvement from the victory last night!