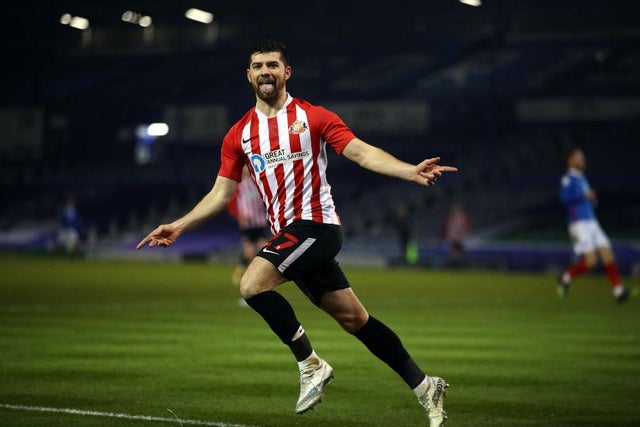 Recent history in this fixture would suggest not. Fratton Park hasn’t been a kind place to Sunderland since we last won there in 1997 but 24 years later the curse on the coast was emphatically lifted with an outstanding performance from the Black Cats, coming out as 2-0 winners in a game they controlled from start to finish against an utterly lifeless Portsmouth team.

Comment of the day: “Nice and steady at the moment” – RonT

Like a door-man standing at the front of the most unpopular nightclub in the city, Lee Burge spent most of the night kicking his feet in boredom. Portsmouth offered very little going forward and failed to register a shot on target throughout the game so it was a very easy night for Sunderland’s goalkeeper. It was another clean sheet in the bag and possibly the simplest one so far.

The ‘Brummie Baresi’ was again on top form last night and although he wasn’t overly tested by a lacklustre John Marquis, he showed his quality in dealing with the balls thrown in to the box towards the Pompey front-man and shut him down for the entirety of the match. Alongside Luke O’Nien, it is a partnership that will be difficult to break up when our natural centre backs return to full fitness.

The Swiss-army knife of League One footballers put in an outstanding performance last night at Fratton Park, picking up the Man of the Match award and deservedly so as he threw his body on the line at every availability; Every ball in to the box was met by his head and cleared with aplomb.

Another terrific display from the Sunderland captain as he looked to break up play and advance with the ball at every opportunity. Did brilliantly in the first half to come across from the full back position to make a block in the penalty area to prevent a rare but dangerous opportunity for Portsmouth.

Midway through the first half McFadzean kicked the ball out of play under no pressure at all and audibly groaned along with the thousands of supporters sat at home watching him do it. Despite that moment, it wasn’t a bad game at all and he benefitted from the work-rate of those around him last night.

It can’t be easy to come in to a game as a substitute, as Winchester had in the majority of his previous outings and attempt to make an impression in a defensive role but he definitely made a statement last night and he deserves the plaudits for that. Showing for the ball, offering some nice touches at speed and linking the play between the midfield, defence and attack, it was a great performance from the Northern Irishman.

Surely a professional footballer with the experience of Josh Scowen should know how to take their time with possession of the ball and in a game of such control from a Sunderland point of view, it almost seems impossible to have looked as unassured as he did at times last night. If we’re now looking at moving in to the automatic promotion spots it’s time for Scowen to step up, put his foot on the ball and find his man with more regularity than he has in recent weeks.

In big games you need big performances and what a performance from Jordan Jones as he ran tirelessly at the Portsmouth backline throughout the 90 minutes. His pressure resulted in a goal as he chased down a loose ball and chipped a delightful shot past Craig MacGillivray to give Sunderland a 2-goal lead. Was there something metaphorical about him ripping the EFL League One badge from his arm as he scored the goal? Sure, the badge was pretty much falling off but we see you Jordan, we know what that meant.

COTD: “A certainty for Strictly when he retires” – Keep It Going

As McGeady finds himself completing more minutes since his return to the squad, we are also getting the benefits of his work-rate throughout the game as he spent most of the game up and down the pitch. It kept the heat away from McFadzean last night and our struggling full back benefitted from McGeady’s desire to get back and help the team. It was his fizzing shot from outside the box that lead to the first goal last night and it was another accomplished performance from the classy 35-year-old.

Forced off early in the second half with an injury, it was a busy performance up until that for O’Brien and he looked after the ball well and kept Portsmouth busy with his constant running and movement. An ideal foil for Charlie Wyke, maybe but showing very little in terms of danger when it comes to being a goalscoring presence for the Black Cats.

A fantastic first half header meant it was goal number 21 for Charlie Wyke in the league this season and was it in any doubt when the ball left his head? I’d say Charlie doesn’t need feet considering the amount of headed goals he’s scored but where would that stupendous hold up play be without them? I’m consistently flabbergasted that Wyke has turned around his Sunderland career in such a way but fair play to him.

COTD: “Got away with one” - Anonymous

With a lockdown afro that Michael Jackson would be impressed by, Flanagan moonwalked on a substitute for the injured Aiden O’Brien early in the second half. Despite the argument that he could have given away a penalty, it was a comfortable performance from him as he slotted in to confirm the clean sheet for Sunderland.