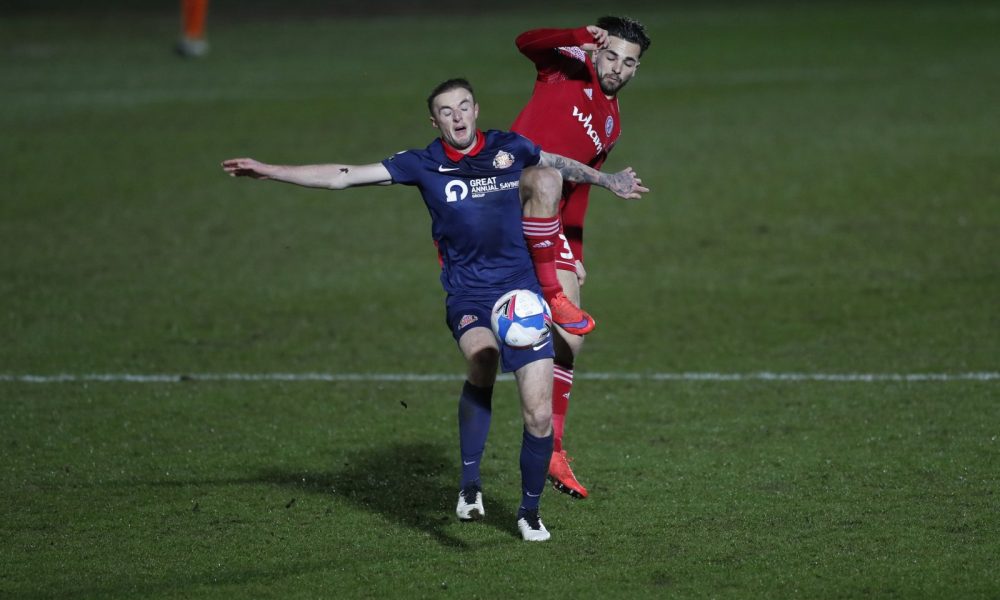 It was a big game on Wednesday night as those around us were dropping points and it was up to Sunderland to take advantage of that if they were serious about reaching the automatic spots at the business end of the season. A tough test stood in our way as well as an awfully difficult playing surface but the lads came through with a dogged 2-0 victory.

The first man to win silverware for Sunderland AFC since the legendary Bob Stokoe had a lot to think about when it came to team selection before the game against Accrington; It has been a busy schedule for the Black Cats and Lee Johnson decided to make big changes to the starting line-up. The first half was one to forget but his second half decision making in terms of substitutes and tactics swung the game in to Sunderland’s favour.

COTD: “Little to do again” – Hill of Beath

After a superb performance in the cup final it was back to finishing his crosswords, sudoku and word puzzles throughout the 90 minutes against Accrington. For the second league game in a row, a team failed to register a shot on target against Lee Burge and he must be loving the work he’s seeing in front of him week in, week out.

COTD: “Continues to look a class above” - CC

We thought we’d miss him in the cup final and although we didn’t, he showed us his quality throughout the 90 minutes last night. It was an unusually sloppy performance from Luke O’Nien but Dion covered those slight mistakes on multiple occasions and looked class, assured and confident in doing so.

Two man of the match performances in a row were followed by an erratic performance last night where decision making was at times questionable from the young man of all positions. It seems unfair to concentrate on those slight mistakes because all round it was a solid performance from O’Nien.

COTD: “Steady but nothing special” - Anonymous

One of the most improved players since the reign of Lee Johnson started the game at centre-back yesterday and it was a steady, quiet performance from the Northern Irishman. Could be argued that he can do better when on the ball but there can be no question of his defensive commitment last night.

Some supporters may have been apprehensive to see the return of Jake Vokins to the starting line-up, considering his previous performances had been somewhat questionable but he showed his potential last night with a confident performance as a left wing-back.

COTD: “Kept the team on their toes” – Lance

48 hours from lifting the Papa John’s trophy and busting out dance moves that my Dad would be embarrassed by, Max Power put in another brilliant performance in the middle of the pitch. Constantly harassing the Accrington players and getting his foot on the ball when possible on a very muddy pitch, Max tried his best to lead by example and the rest of the team followed suit.

COTD: “Rolled up his sleeves and showed his quality” - CC

The nickname “Winiesta” seemed very appropriate considering Winchester’s performance last night as he slotted in as a replacement for a resting Grant Leadbitter. Consistently breaking up play and getting involved wherever possible, it was a tremendous performance from the former Forest Green captain.

COTD: “Hot and cold but typical Gooch, he never gives up” – Rob Ramsey

You would have hoped to have seen a man full of confidence after his cup final winning exploits but it was a quiet game from Lynden Gooch. Could he still be finding fitness or is he carrying an injury? These questions should be asked as Gooch has shown far much more quality in the past than he has recently. He did, as always, work hard for the shirt and you can never question his commitment.

COTD: “Showed frustration but it also shows he cares” – Hill of Beath

Kicking the ball away in frustration midway through the second half pretty much summed up Aiden’s showing last night against Accrington. For all his effort, he was unable to find the killer pass or receive the ball from a teammate when he found himself in an advantageous position.

He had one great attempt on goal, although the shot itself was a feeble effort. He also could have been played through on goal had Wyke opted to choose that pass instead of the safer option out wide but other than that it was a largely low key affair for Jack Diamond where he had probably hoped to make more of an impact on the game than he did.

We read an interesting stat on Twitter that 26 out of 27 of Charlie’s goals had been one touch finishes for Sunderland this season and that showed again last night with him being in the right place to head home the second goal of the night. He has become a master at escaping his marker and his all-round play was incredibly helpful to those struggling to get their foot on the ball around him

COTD: “We might need to order some disco pants” - Anonymous

Well it’s only taken two months for him to make his first appearance for Sunderland and what an incredible 45 minutes from Ross Stewart. You couldn’t help but draw comparison between him and the iconic Niall Quinn purely because of his height but his goal, a fantastic looping header that broke the deadlock, was also of a similar Quinny style too. Ross also looked incredibly mobile and offered some lovely deft touches in and around the box to ultimately change the fortunes of Sunderland on the night. I’m looking forward to seeing more.

If there was a game crying out for Josh Scowen then it was this one, it was getting messy and the pitch was far too poor to try and keep the ball moving across the surface. So, on comes the little terrier and it was a great cameo from him as he broke up the play well and harassed the Accrington midfield and backline in to making mistakes for the rest of the game.