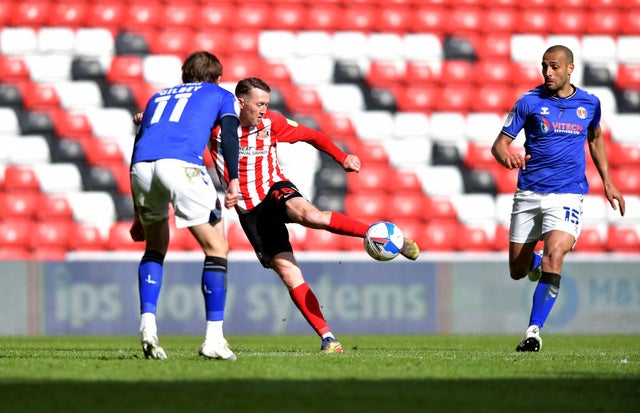 The Addicks took the lead through a bizarre own goal from midfielder Josh Scowen. Alex Gilby doubled their lead in the 61st minute. Scowen gave the Lads a glimmer of hope with a diving header in the 77th minute which ultimately faded out.

As the Lads lost I have had to change to 1 Good and 2 Bad for this game.

One positive factor to take from this game was the volume of chances the Lads created. Usually, Sunderland will win games but not create a great deal of clear-cut chances. However, in the first half, the lads should have been at least two goals to the good.

It was a rare off day for marksman Charlie Wyke who spurned a one-on-one with Addicks ‘keeper Ben Amos. Perhaps, it is reassuring that the Lads did create high quality chances after the Peterborough game were despite having more of the ball, the Black Cats did not carve out a great deal of chances. Throughout the 90 minutes, the Charlton defence looked far from watertight and on another day the scoreline would have been very different but that is football.

Chaos at the back

Both of Charlton’s goals came from calamites at the back from Sunderland players.

The first was a result of a set piece that was not dealt with. Wyke will feel hard done by as he was obstructed in his failed attempt to beat the colossal Ryan Inniss to the ball. Inniss’ header was a tame one. However, ‘keeper Lee Burge parried the ball backwards and Josh Scowen comedically sliced the ball into his own net.

The combination of errors from both Burge and Scowen are freak occurrences but you could not pinpoint a worse time for them to happen.

The second Charlton goal occurred when Lads manager Johnson made a raft of changes. On the 61st minute Johnson made four substitutions and changed formation. This was obviously an information overload for the players on the pitch as they clearly struggled to take it onboard.

A simple attacking throw in form Charlton found its way into the Sunderland box where the Black Cats defensive organisation was a mess with various players not knowing where they were supposed to be.

The most frustrating thing about both goals that they were avoidable, and these types of lapses are often so rare.

Charlton Athletic brought a different weapon than most other teams in this division. Their team is built around the immense physicality they had available.

The tone of game was set as soon as target man Stockley won his first header. Without scoring, he looked far too much for Luke O’Nien and Dion Sanderson.

In the past, Sunderland have always struggled against these sorts of teams. When Gillingham came to the Stadium of Light, they finished the game with two mammoth strikers in John Akinde and Vadine Oliver. They caused mayhem in the Sunderland penalty area, just like Stockley did on Saturday.