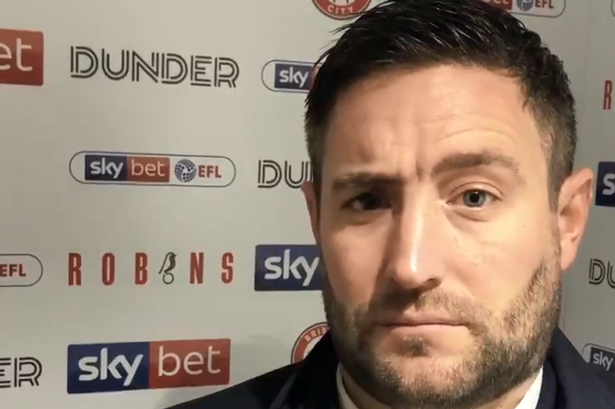 Claptrap, cliche and nonsense were a feature of Lee Johnson’s tenure at Bristol City. Fans at Ashton Gate regularly rolled their eyes at Mr Johnson’s brand of footballing psychology and philosophy.

The Black Cats boss has a tendency to come out with some baffling stuff. Sort of a cross between Joey Barton and David Brent if you like.

He’s only been in the Sunderland hot seat since December but Lee Johnson is already amassing quite the quote back catalogue. Those poor Bristol City supporters had four years of this stuff.

On Sunderland’s new-found physicality after beating Bristol Rovers in March:

“Do sharks worry about Monday? No. They go around being sharks, biting stuff and being aggressive…

...So yeah we bit a few ankles today that’s for sure.”

Ok boss. Now snatch a few victories from the JAWS of defeat before the season end. HO! All together now - baby shark do do do do de do.

On why his players didn’t seem to know what they were doing against Wigan and why the entire side scratched their head at his quadruple substitution:

“There is an element of tactical fatigue, or concentration fatigue.”

Unremarkable by itself perhaps. Trouble is, Johnson liked to use that one when he was at Ashton Gate too - regularly. To make matters worse, this is what he said when he first took the job at the Stadium of Light:

“My challenge now is to make sure I don't tactically fatigue the boys and don't bamboozle them.”

Yep, failed on that one then Lee. Everyone seems bamboozled of late.

On how he delivers talks in training riddled with Johnsonisms:

On how Luke O’Nien and Josh Scowen are an extension of himself:

“You want your personality as a manager to come across on the pitch, I think, and players like Luke and Scowen epitomise that with their ability to be all-action.”

No matter hard we try, we just don't want our personality to resemble Josh Scowen's showings on the pitch.

Here’s a selection of nuggets from the nugget himself during his tenure at Bristol City. Play along in a game of Johnsonism bingo to see which of the following Sunderland supporters will be treated to:

"I’ll meditate when I’m dead. In the meantime, I’ve got to get promoted."

Yes, you do this time too Lee. Play off success and meditation please.

"I’ve had all my tests done (by the League Managers Association) done...and my ‘state of awareness’ was dangerously high during the day, which means I never switched off."

Lee's simply a higher being than most of us. High on something maybe.

"I was named the eighth best manager in the world under 40."

"I get up every morning, take a big sniff of air and say, ‘I’m turning up today and going to leave this place better than it was 24 hours ago.’”

" I want to see us play with more aggression, improve the world class basics, and with that we will continue to compete."

"We've conceded two poor goals, we talked about being good in flow, but also in the clutch phase dealing with corners, set-pieces but that's where we failed."

We've googled "clutch phase" and can't find any definition of it, anywhere.

"I'm going to stick my neck on the line a little bit and say Europa League.”

"Between their second and third goal, I thought we were fantastic"

After his side lost 4-0 to Brentford at home

“The only thing I would question from my staff and my team's performance was, was that arousal level almost too high? It's a fine balance and individuals have got to find that key performance arousal level from the start.”

Goodness matron, after his team lost against Blackburn it seemed the players were simply too turned on or something

"There was about 85% of our players that had pink on their boots. For someone who's old school in terms of black leather boots, either moulds or traditional rounded studs, it was something that I wanted to question.”

On why his players kept slipping in a game at Blackburn - it was the pink you see.

Credit: we can't take credit for locating this bunch, much of it was taken from the OTIB forum, the Bristol City forum where Johnsonisms were celebrated for many years.